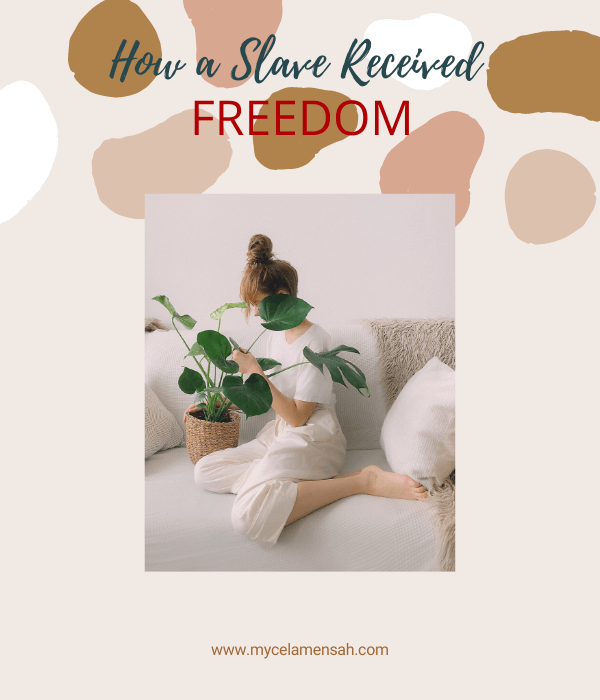 Do you feel enslaved and wants to know how to come out of it? Learn how a slave received freedom to live a normal life after reconciling with his master.

In Genesis 1:26, the Bible says, Then God said, “Let Us make man in Our image, according to Our likeness; let them have dominion over the fish of the seas, over the birds of the air, and over every creeping thing that creeps on the earth.” So each one of us was created in the image of God and our lives are profitable to Him.

Slave trade business was thriving also in the days of apostle Paul. In the Bible we read a story of a slave who run away from his master, how he got saved by God’s grace and became a spiritual son to Paul who later sent him back to his master to reconcile with him.

Here is the story, and how it relate to us and the lessons we can learn from it. Because we were all once upon a time enslaved by sin and separated from God but Jesus Christ death reconciled us back to God, to our original state. We all need a savior!

The Book of Philemon vividly reminds us that the church has always advanced through the work and dedication of ordinary people. In the early church, there were a few notable figures like Paul, Peter and James. But God’s Word records lesser-known names like Philemon and Onesimus so we might never forget that He has a mission for each of us – whether we are familiar to many or known only within our local congregations.

When Paul wrote this letter (c. AD 60), he was serving a two-year house arrest in Rome, which meant he was monitored 24 hours a day by a personal, live-in prison guard (Acts 28:16). Although Paul was not permitted to come and go as he pleased, he did have one important freedom: he could receive visitors, from Jewish leaders (Acts 28:17-28) to coworkers and supporters (Col. 4:7-14).

One such visitor was a slave named Onesimus, who belonged to an affluent Christian leader in the Colossian church named Philemon (Philemon 1:16). It is possible that Onesimus fled from and even stole from his master, Philemon. It is also possible that slave and master had some kind of dispute. In such instances, under Roman law a slave was permitted to seek out a third party to help settle the dispute. Either way, Onesimus ended up with Paul in Rome and became a Christian. And Paul persuaded the runaway to return to his master so that Onesimus might seek forgiveness and that Philemon might grant it.

Healing is evidence when we go back to the root of the problem to reconcile and forgive!

Sending Onesimus back to Colossae was costly for Paul; in a practical sense, Paul needed Onesimus much more than Philemon did, because the runaway slave had become a real help to him in the spread of the faith. But Paul was concerned with more than his own personal comfort and welfare. He knew that seeing the two men reunited as brothers in Christ would have a far greater impact on the church in Colossae, and the reputation of the gospel, than almost anything else could. That reunion would be a display of humility, love, forgiveness, restoration, reconciliation, and thanksgiving. It would be a living illustration of the divine drama of redemption, and the love that Christ extends to us all.

A Picture of the Gospel

In the content of the letter Paul sent to Philemon, we see that Paul thought highly of Philemon, who hosted a house church in Colossae and must have been a person of means.

Paul follows a clear pattern in this private letter. First, he establishes rapport with Philemon (4-7), who was apparently a beloved friend and Christian brother. Then he appeals to reason and compassion in order to persuade Philemon to accept Onesimus back (8-16). Finally, he makes his request; Philemon should receive the new Onesimus while forgiving the actions of the old one (17-22).

The themes of Paul’s letter give us a picture of the gospel.

Forgiveness and Reconciliation: Other words from Paul, “Be kind and compassionate to one another, forgiving each other, just as in Christ God forgave you” (Ephesians 4:32), are echoed in this letter as the apostle asks Philemon to extend his love for “all the saints” (5) to a new saint, Onesimus (4-7, 17). In Christ, all barriers and social distinctions are set aside. Christian love and forgiveness transcend all human distinctions (1 Cor. 12:13; Gal. 3:28; Col. 3:11).

Transformation: The heart of Paul’s message is that “in Christ, (Onesimus) is a new creation” (2 Cor. 5:17). The power of the gospel had transformed this slave. Philemon would be welcoming home a changed Onesimus (Philemon 1:10-11).

Sacrifice: Reconciliation and forgiveness come with a price. Paul set an example of sacrifice for Philemon by giving up Onesimus’ service to him and also offering to pay for the slave’s former misdeeds. Paul uses the occasion to apply the heart of the gospel message, Christ’s sacrifice, to this situation (Philemon 1:12 ; 13; 18).

You are Set Free by Forgiveness

The NT emphasizes spiritual change, change from the inside out. The Book of Philemon simultaneously illustrates this truth and offers a rich analogy of the lengths God will go to set any captive free, especially in our slavery to sin. We are all running from God. We have a debt we cannot repay on our own, a debt to death, not to dollars. But God, in His infinite grace, sent His Son Jesus to be our Savior, to pay all we owe, and to set us free.

Now we must pass along that grace to others, a point Paul made to his friend Philemon that still speaks across the channels of history: If our heavenly Father could forgive this brother in the Lord who has wronged you, shouldn’t you forgive him as well? And if God has forgiven you, shouldn’t you extend that same forgiveness to others?

We cannot claim to have experienced God’s love and forgiveness if we refuse to forgive others. Christian forgiveness knows no boundaries. It is available to all!