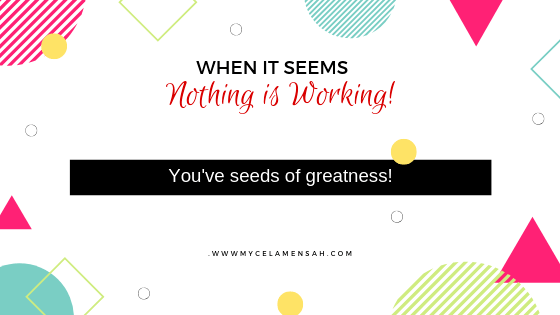 “Listen to me.  You can do this, ok.  I believe in you, the school believes in you.  That’s why you were selected out of the lot.  Have the ‘I can do spirit’ and you’ll make us proud.  And one more thing, pray before you go in.  I know you don’t pray much but if we’re going to win this, there’s only one solution.  Prayer!

I’ve known Clair for as long as I’ve known myself.  There have been lots of trying times when she had been a source of encouragement to me.  Like now!

Know That Your Decisions After Others

I’m representing my school in an inter-school quiz which will determine the best school in the country.  Word Life International School expects the best and only the best from their students and therefore do not accept the 2nd position in any competition.  But from the looks of things, I may disappoint them and everyone at the school.  I mean don’t know what’s wrong with me today because I can’t get my head straight.

Yes, there’s a lot going on in my life right now but that has never made me lose concentration.

“Where are you going to?”  You have to get inside in less than 15 minutes,” Clair cries out!

But I still walked out on her.  I knew she’ll be hurt but I really needed some time alone to clear my head.  I’ll just take about 5 minutes then I’ll go back, of which I don’t want to.  Huh… this is just going to add up to my stress.

I finally reach my destination and I sat at my favorite spot, where I feel I can think better.  A lot of things started running through my head that I don’t know if I’ll ever be able to sort them out.  My mom’s illness, my dad’s absenteeism, my grandma’s maltreatment and….. that issue.  Even if nothing at all would go away, for that issue, it has to simply disappear.

It’s Not Ove Until It’s Over

“Oh, no, no, no!” I scream as I glance at my watch.  I’m already 10 minutes late.  What started off as a fast walk broke off into a run.  “Miss Kristen Cambell, if you can hear me pleaseee move here right now.”  I could hear as I get closer to the auditorium and from the way the quiz mistress spoke, I can tell I’m in trouble.

When I entered, all eyes turn on me and I felt my legs turn to jelly.  Now I have to move to my seat alone since the other contestants have already proceeded to theirs.  I walked slowly to the front.

Does this woman have to say everything in the microphone?  She’s only making me more tensed, but all the same I tried to walk faster.

Even though I was seated, I can still feel eyes on me.  I coughed and said sorry to no one in particular.

“We’re going to continue with the 3rd round,” the quiz mistress announced that and rings the bell.

I’m not really a church person but I followed Clair’s advice and prayed, hoping God hears me somehow, because I remember my grandpa told me He’s good person and listens to the prayers of all.

“God, please help me excel in the rest of the rounds.”  Let me at least place 2nd, Amen.

The third round went well and so did the fourth and fifth.  And judging from the scores, I may be second or third.  At least, it’s better than at the bottom.

“Now it’s time to announce the results.  And I must say I’m very surprised at the outcome.  One of the contestant didn’t do so well in the first and second round but in the rounds that followed, she …. I mean, the contestant did so well that the debts incurred were cancelled.”

I’m guessing it’s that girl who was fussing so much.  She really did well in the fourth and fifth rounds.  I know it’s a girl because the quiz mistress said ‘she’ and later corrected herself.  I’m really sharp when it comes to these things.

“So starting from the bottom, the sixth position goes to ….Mr. Jay Johnson representing Western School.”

There was applause as he went for his award.

The rest of the positions were mentioned and then…

“Now we are left with the first and second positions.  Who do you think will occupy the first position?

There was noise as everyone was mentioning the school he or she thought will win.

Wait!  What position did I occupy?  I was so lost in my thoughts that I didn’t notice.  I quickly look at the board where the positions are written and I sigh in relief when I saw that I had not occupied any of the positions yet.  So which means I will either be first or second.  But I’m sure I’ll be second because that boy sitting there is really good.

I can see a lot of surprised faces in the crowd, I don’t blame them.  Even I, was surprised too!  I spotted Clair somewhere in the crowd giving me thumbs up.  I took a last glance at the stage and realized, I’m the only one here.  I proceeded to go for my award but before I got there, the tears I have been holding back for a while now flow down my cheeks.