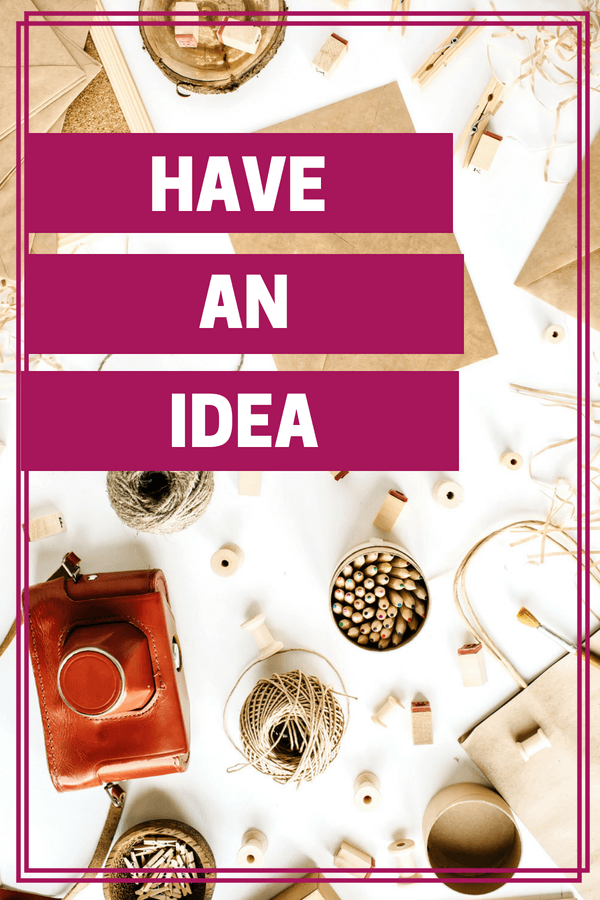 An idea is thought or collection of thoughts that generate in the mind.  It’s usually generated with intent, but can also be created unintentionally.  Ideas often form during brainstorming sessions or through discussions (Business Dictionary).

A godly idea is when you depend on God to direct your thought in the right direction in accordance with His plans and purposes for your life. In other for God to direct one’s paths, a person must be doing whatever he or she already knows to be right-obedience activates God’s promises.  To depend on your own understanding of truth and life means to disregard God’s will.

The building of any entity begins with a thought, an idea.  The institutions, corporations, businesses, enterprises and many more all begin with a thought, an idea, concept someone had. The same as the gargets, technology, concepts we have now, was not there in about ten, fifteen years ago. Everyday someone is getting an idea to implement something and imagining the outcome.

Again an idea is having a perception of the future better than the present state and working towards that.

The Bible did not mention her name, but she made up her mind to change her situation by her imagination and faith brought her, her breakthrough. I am talking of the woman with the issue of blood.

She has bled for twelve years and suffered from the hands of many physicians but no solution to her problem.  And in those days when a woman menstruates she is declared unclean and she is not allowed to mingle or go to certain places and she not to do any house chores for the family.  Leviticus 15: 19, If a woman has a discharge, and the discharge from her body is blood, she shall be set apart seven days; and whoever touches her shall be unclean until evening. Verse 25; If a woman has a discharge of blood for many days, other than at the time of her customary impurity, or if it runs beyond her usual time of impurity, all the days of her unclean discharge shall be as the days of her customary impurity.  She shall be unclean.

This was the time she found herself, she bled not for seven days but for twelve years, she was an outcast because of her bleeding and should not be seen in any public place, or else it can cause her life.  I believe when she heard about Jesus Christ and all the miracles He has been performing, she had a thought, an idea and imagined herself healed by any access she can possibly think of to get to Jesus.

The difficulties she might go through before getting to Jesus did not prevent her from achieving her goal.  This was a great risk, what if someone notices her and gets stoned before she can even get to Jesus.  But her focused determination was to get close to Jesus, what happens before she gets to her final destination did not stop her.  She might have covered her whole body and walked behind the crowd, pushing herself closer and closer, sometimes she may be pushed down, shouldered, crawl like a baby, shouted at, insulted, humiliated, ridiculed, look down upon, some people covering their nose because she smells, all this did not prevent her from getting what she wanted.

The great multitude that followed Jesus did not scare her to back out, nothing was going to stop her, she was determine that even if she doesn’t get Him to touch her but crawl behind and touches just the hem of His garment, and she will be healed.

This was how great her determination was. The journey to achieve an idea or thought comes with challenges but the achievers look at the end result, rather than the problems.  With this positive attitude she got her healing.  Now a certain woman had a flow of blood for twelve years, and had suffered many things from many physicians.  She had spent all that she had and was no better, but rather grew worse.  When she heard about Jesus, she came behind Him in the crowd and touched His garment. For she said, if only I may touch His clothes, I shall be made well.  Immediately the fountain of her blood was dried up, and she felt in her body that she was healed of the affliction. Mark 5:25-29

Perceive the end result through your idea

The heart of man is changed when the mind is transformed.  She having a thought, an idea of perceiving her healing brought her the healing.  As the saying goes, “no condition is permanent; it only becomes permanent when you do not imagine yourself coming out of it.  Whatever condition you find yourself today, you have the responsibility to make the choice of changing your situation with the help of God.

You have to desire the best for your life and the Lord will honor it.  The Bible says, Delight yourself also in the Lord, and He shall give you the desires of your heart. Psalms 37:4

I have learnt in life that whatever you speak over yourself comes to pass.  I have witnessed some of the words I spoke over my life when growing up came to fusion.  I had the desire of marrying a Pastor.  When it got to the time of getting married, God brought a lot of Pastors my way and I married one of them.

You are the image of God created to have dominion over His creation.  God gave power and authority to man to rule the earth and everything in it.  Always have an idea and let your mind begin to sour.  It is never an offense to imagine great things, it rather an offense to God for not doing so because you limit Him in your thinking. Yes, again and again they tempted God, And limited the Holy One of Israel.  They did not remember His power: The day when He redeemed them from the enemy.  Psalms 78:41-42